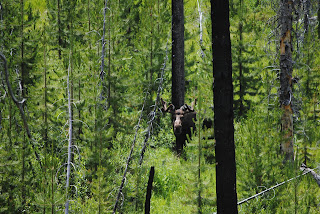 A great hike we have taken is what I like to call “The Moose Hike”.  Why, you ask? Because we have gone on that hike three times and all three times we have seen the Moose. I really believe he is the same one that seems to live and hang out in the same general area seen from the trail. It’s a two mile hike to the lake and two miles back out, which I thought, no problem I can easily do four miles. Well, aaugh, it was a tough four miles. It isn’t maintained and there was a forest fire at that location years ago, so there are many downed burnt trees in the path. So there is a lot of climbing over and crawling under along the way. And the first time my husband and I went, we were not very prepared and we had our dogs. I thought I was gonna die by the time we got back to the truck! So when my son and his girlfriend came out to visit us and then later my sister and brother-and-law came out, we took both sets on the hike. Why, when I thought it was going to kill me the first time? Because of the Moose! Now, it’s known that a moose can be even more dangerous than a bear so you have to be careful and avoid them. Don’t get too close because they could charge you and they are huge. But this guy seemed to be used to people walking by him on the trail so he just watches you walk by. Now he isn’t right next to the trail, he is down in the marshy area below the trail, so you aren’t real close but close enough to get some great pictures with a zoom lens. This trail is up beyond Skalkaho Falls and it ends up at a lake. The lake is visited by fishermen and there was one up there fishing that told us that sometimes while out on a boat fishing, the moose swim right by you. It’s very secluded and you won’t see hardly any people up there, so make sure someone knows where you are going before taking that hike. We saw some wildlife on that trip. On the way up to the hike, off the side of Skalkaho Highway, we saw this cute little mountain goat. 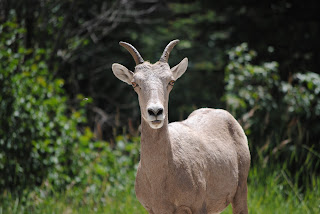 And going back the dirt road closer to the hiking trail, we passed some deer and on the hike passed this deer 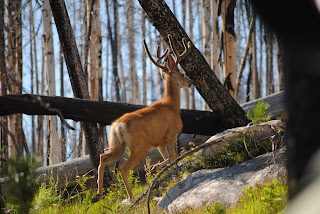 and of course my buddy, the Moose. 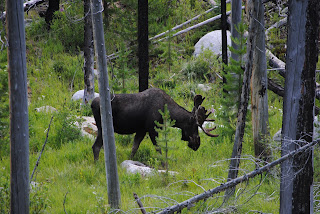 It can be a tough hike but well worth it! My son is coming out to Montana to visit us again this year and told me that he wants to take the Moose hike again. Trying to get in shape so that I can handle it again! Hope we can see our buddy, Mr.Moose again.
Posted by harrigce at 12:36 PM No comments: 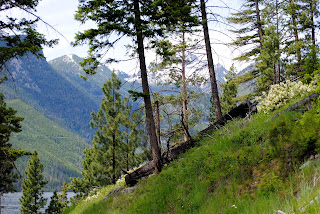 A wonderful easy hike is the trail along the Lake Como. Located only 20 minutes from our cabins, this hike is 7 miles long round trip and since it is relatively level the whole way it's not too hard on the 'ole body. The trail runs alongside the lake pretty much the whole way and there are spots that you can go into the water or sit and fish. Which our two dogs, Shadow and Diego loved so that they could swim and cool off. And cool off you will, because the water is cold. The day we went it was a perfect day for a long hike being in the 70's and sunny. 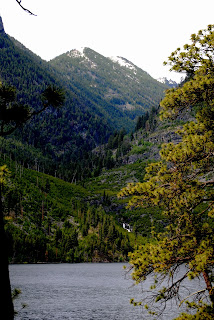 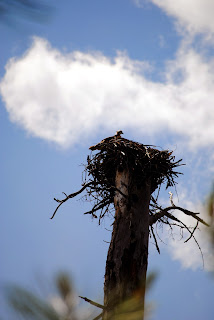 The hike starts out paved for a short distance and has a few benches along the way to sit down and relax and enjoy the view. We passed an elderly woman taking a little walk along that part of the trail. It then becomes a dirt path for most of the trail. Along the way we didn't see any bear, deer or elk (although I'm sure they are out there) but we ran into numerous chipmunks teasing our border collie, Diego. We also saw a large nest that looked like it could of been an eagle inside it. It was hard to get a good look at him to tell for sure but I included the picture of him for you to decide. We did see two of them flying around close to the nest and they looked like eagles to me. What do you think? 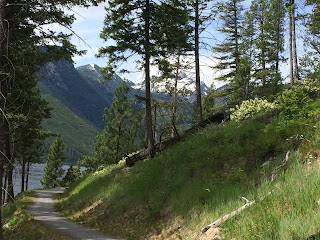 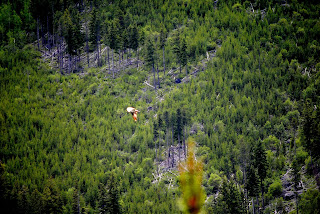 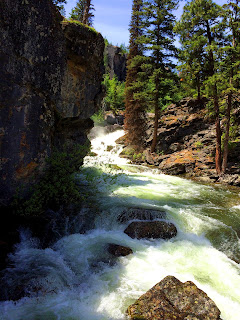 We hiked to the waterfall and then turned around and came back the same trail. We didn't chose to go the rest of the way all the way around the lake. Wasn't sure if my old dog, Shadow could make that distance. Yep, I'm blaming it on the old dog. Actually he did real good, I was the one with sore feet by the end. The rest of my muscles were okay though. Trying hard to get into shape so that we can do some of the harder and steeper hikes that are in the Bitterroot Valley. There are numerous hiking trails all up and down the valley. I will attempt to blog about those other hikes as we do them. Now here comes the plug for our lovely cabins: If you are coming to visit the beautiful Bitterroot Valley in western Montana, check out staying in one of our cozy and relaxing cabins. We are located in the country only three miles from the small downtown of Corvallis and three miles from the town of Hamilton. Hamilton has nice restaurants, galleries, shops, and the grocery stores. To see what our cabins look like and to book them go to our website: www.wildernessspiritcabins.lodgify.com 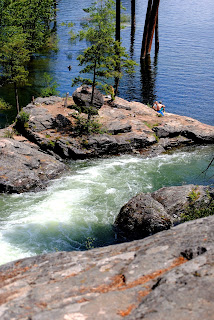 A Welcome visitor at the Wolf Den Cabin 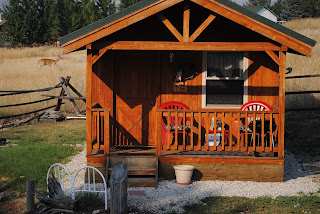 It's that time of year again that the Mule Deer start to visit us at the cabins. You can watch them come out in the field below and sometimes they work themselves up into the field beside and behind the cabins. They have even come into our yard and like to eat on my roses. This is a beautiful time of year to visit Montana and the Bitterroot Valley. Our cabins are getting a lot of bookings filled in for the summer. The Wolf Den cabin is about halfway booked up. The Eagle Nest cabin, which is our largest cabin, still has a lot of openings for the summer months. Check it out on our website:www.wildernessspiritcabins.lodgify.com
Posted by harrigce at 9:15 AM No comments:

Wondering what to do in the Bitterroot Valley? Check out the chamber guide starting on page 12-20 for tons of fun activities! Information on our cabins is located on page 74!

Posted by harrigce at 1:33 PM No comments:

Posted by harrigce at 9:09 AM No comments:

Put on your glasses and enjoy this view from Wilderness Spirit Cabins in Montana! 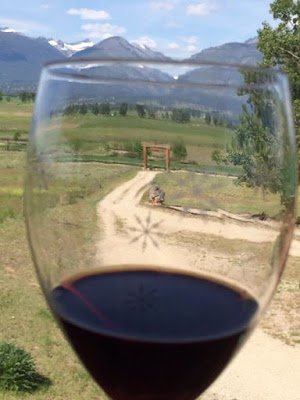 Posted by harrigce at 1:37 PM No comments:

Anxious to revisit the beauty of Montana and enjoy these awesome sunrises!